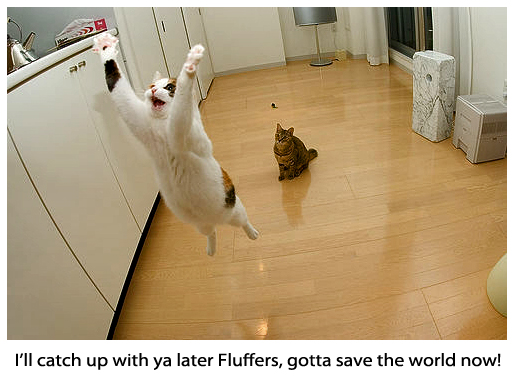 All was calm in the Smith’s family kitchen. The kitties were chit chatting and gossiping about the neighbour’s new dog and about how Fuzzer embarrassed himself by falling from that fence last week when…all of a sudden, some ultra sounds break up the calm of the afternoon! The world is in trouble and Supercat has no time to lose! So up it goes, through the newly renovated ceiling… Go Supercat, GO!


Thought emotions are just for us? 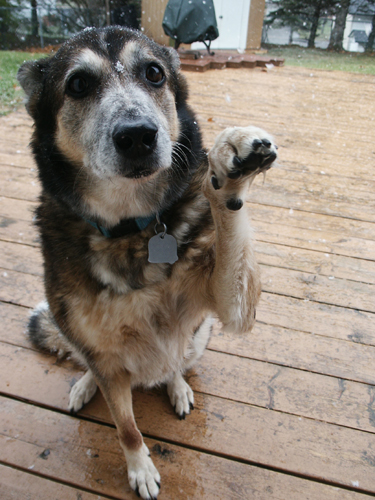 It was clouded all of a sudden. The clear blue got covered with dark heavy clouds but the air was dry. Not a rain drop, not a thunder nor a wind breeze. The last hen in yard was struggling with a small worm. The tiny bastard refuses with an admirable stubbornness to get out of the dried out soil. Since Joseph’s crops finished, it had to find the food by itself. Besides, the other poultry was eaten months ago and there was not much to do alone. So searching for food occupied the whole day of the brainless bird.

On the last step of the house the man in his 60’s, or maybe 80’s…you couldn’t tell for sure, that’s how tormented his face was, sat petting his big friend on the black fur. The eyes of the animal were restless and unpatient. Ever since Joseph found the massive dog with a broken leg abandoned next to the railways and took him home, a silent friendship was born. The man rarely spoke and when he did, it was with a faint voice, petting the dog and sharing his bread. But the animal understood somehow. He didn’t bark once in the past five months since he was there, as a sign of respect for his savior and new master.

But today something strange was in the air and Dog ( as he was always called ) could feel it. The hand on his head was resting now, giving up the petting motions and the other hand of the man was holding his forehead. “What will we eat tomorrow…?” The sky got darker but still no rain. Dog raised his head every 30 seconds and looked at the line of the horizon, as waiting for something to happen. Then he looked at the hen. The worm still wasn’t out yet.

Then Dog stood up and started barking loudly, like the devil was chasing him. He was turned towards Joseph and blocked the entrance of the house, showing his sharp white teeth. With a stunned and frightened look, Joseph got up and took one step back. He tried to pass by Dog and enter the house, but the animal was a few centimeters close of biting him, with an anger and rage the man hasn’t seen before in his life, not even when he was hunting furious bears. He understood then. Dog was rabid. Moving away from the door of the house, the animal seemed to become more calm, but still stood there guarding the entrance. Trying to talk to him, Joseph had a few attempts to get closer, but the result was the same…The massive beast started barking and tried to bite. The scene could freeze someone’s blood and even the stupid hen forgot about the worm and ran to the back of the yard, bouncing its round body on the skinny legs.

With the saddest look a man can be capable of, Joseph knew that there was no alternative…Rabid dogs can’t be cured and they only suffer more alive…His old hunting gun was in the empty stable and he got it. Dog’s eyes had a weird wet expression of love and furry at the same time. Without a word, but with a small heavy heart, Joseph shot his friend. The body collapsed in the door way and the dry dust formed a small cloud around it. Sitting in the yard like a fool, staring at what he had done, a strong force shook the ground and Joseph fell unconscious, hitting his head.

It must have been half an hour or so when he got up and saw…There had been an earthquake and the house collapsed… He could see Dog’s tail between the ruins…He thought he had understood before…but he was wrong…The animal paid back the favor of saving a life, as he sensed the disaster coming. Then Joseph knew that he could have been dead in his house if it hadn’t been for his furry friend…And a cold tear rolled down his wrinkled cheek…The hen was back now, looking for its worm…